Yesterday, I unveiled my fourth annual list of the top ten events in American higher education in 2016. Now it’s time for the annual list of the “not top ten” events—which are a mix of puzzling decisions and epic fails that leave most of us wondering what people were thinking. The University of Akron gets a pass this year after topping last year’s list with a $556.40 olive jar for their president’s bedroom, but the 2014 “winner” makes a repeat appearance on this year’s list. Enjoy the list—and send along any feedback that you have!

(10) Media outlets unintentionally showed the gap between the haves and have-nots in higher education. I don’t fully blame the media for paying a lot of attention to elite American colleges, but it’s always worth reminding people that the typical college is fairly broad-access and is operating on a relatively limited budget. Both The Chronicle of Higher Education (first) and Inside Higher Ed (second) illustrated the sharp divides in higher education this year through the stories they placed next to each other.

The Chronicle of Higher Education 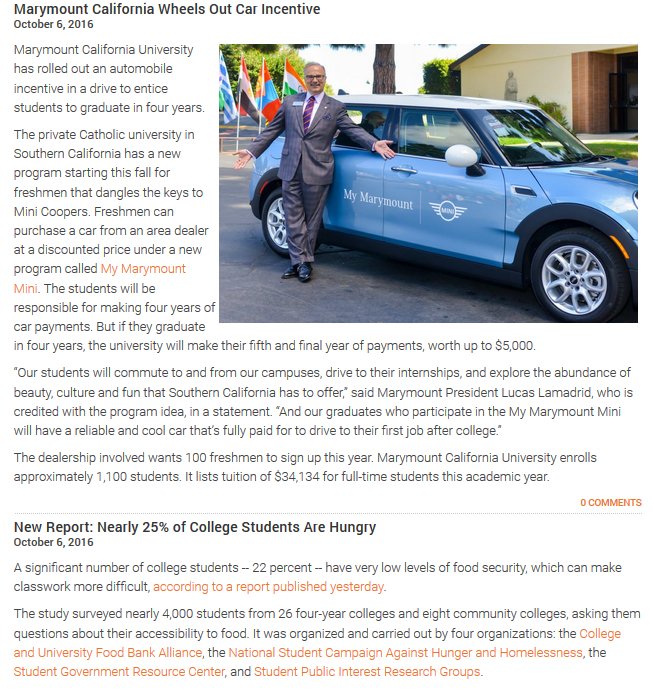 (9) North Carolina’s Forest Trail Sports University exists to serve mediocre student-athletes. In general, I consider myself a supporter of the idea of intercollegiate athletics—although I’m certainly concerned about the implications for many colleges’ budgets. But it’s important to structure college athletics in a way that gives most athletes a quality education, particularly since few colleges athletes will actually go pro in their sport. But the newly created Forest Trail Sports University (with a focus on mediocre athletes) seeks to combine a Waldorf University online education with year-round athletic practices that are not allowed by the NCAA. Although Forest Trail’s website appears not to be active at this point, a Google News search revealed that the institution did play (and lose) at least one basketball game this year.

(8) Pennsylvania finally has a budget, but funding in Illinois is shaky at best. It was only nine months late, but Pennsylvania finally agreed on a budget in late March for the fiscal year beginning in July 2015. “Agreed” may be an overstatement, as Democratic governor Tom Wolf declined to veto a bill that passed the Republican legislature after a long standoff between the executive and legislative branches. But this delay meant that colleges ended up increasing tuition after a freeze was promised in exchanged for increased funding. Meanwhile, Illinois has been without a regular budget for nearly a year and a half at this point as Democratic legislators and Republican governor Bruce Rauner have been unable to teach an agreement. The state has provided some stopgap funding, but enrollment at regional universities has declined and universities have seen their credit ratings downgraded.

(7) Kean University spent $30,000 on a plywood replica of a $219,000 conference table. In 2014, the New Jersey public university was roundly criticized for ordering a $219,000 conference table from China. Somehow, this story ended up getting even worse for Kean, as it turns out the table had not gone through the requisite public bidding process—and that the university had spent $25,000 on a plywood replica of the table. High-end plywood runs about $50 for a 4-foot by 8-foot sheet, so it’s safe to say that most of the money went to pay for architects instead of the actual table. Hopefully, the plywood version of the 22-foot table is getting used somewhere on campus.

(6) Long Island University’s administration locked out faculty and lost the PR battle. Faculty labor disputes are tricky for college administrators to handle. On one hand, price-sensitive private nonprofit colleges have to be very careful giving faculty increases in salary and benefits because students and families end up paying the bill. On the other hand, faculty salary increases often struggle to keep up with inflation. But in any case, Long Island University’s decision to lock out its Brooklyn faculty right before the semester started ended up being a terrible public relations decision. Hundreds of students walked out of classes to protest the lockout, and the university was forced to end the lockout a week later. It’s probably a good idea for colleges to wait for faculty to strike instead of taking the step of locking out faculty.

(5) Both Clinton and Trump had issues with for-profit educational endeavors. Higher education became a focal issue of the 2016 election, but in ways completely unrelated to policy proposals. The Clinton campaign had to answer questions about Bill Clinton’s $17.5 million in earnings over five years as honorary chancellor of Laureate International Universities—owner of Walden University in the United States. Meanwhile, the Trump campaign was dogged by questions about Trump University (which never received federal financial aid), and at points in the campaign, Trump University got more search traffic on Google than most better-known American universities, as the image below shows. The President-elect eventually settled lawsuits against the institution for $25 million in mid-November.

(4) Media outlets and politicians scare students from taking on reasonable amounts of debt for college. As student debt has increased to approximately $1.25 trillion, a chorus of voices have called student debt a ‘crisis.’ From a Consumer Reports cover story to an editorial in my state’s largest paper (to which I wrote a response) and statements by both Hillary Clinton and Donald Trump, prospective students are hearing that borrowing for college is bad. These statements rarely even mention income-driven repayment plans, which take away much of the risk for students (and the risk to taxpayers for undergraduate debt is relatively modest compared to graduate student debt). Debt and no degree is not a great outcome, but being unwilling to borrow and dropping out of college as a result can potentially be even worse.

(3) The University of Louisville is in the midst of a bizarre governance dispute. The university has had a rough few years, highlighted by the NCAA charging the top-notch men’s basketball program with major rules violations over a university employee providing recruits with prostitutes. Louisville’s situation became even stranger in June when newly elected Republican governor Matt Bevin decided to dissolve the university’s 20-member board and fire the university’s president, replacing the board with a 13-member board which contained ten of his appointments. Andy Beshear, the state’s Democratic attorney general, sued to block the changes and defeated Bevin in court in September. Louisville’s accreditor then placed the university on probation last week due to governance concerns.

(2) After a top-notch investigation, New Jersey changed its state student loan program to forgive loans in cases of death or disability. Federal student loan programs receive a lot of attention, but state-run programs generally fly under the radar. Of the $351 million in state student loans in the 2014-15 academic year, $166 million were issued as a part of New Jersey’s program. Annie Waldman of ProPublica shed some light on the program’s more onerous conditions (including the lack of forgiveness upon death) in a New York Times feature in July, which prompted the legislature to act. By December, Governor Christie signed a law that would forgive loans upon death or permanent disability—at the price tag of about $1.5 million per year.

(1) Mount St. Mary’s University (MD) president resigned after his infamous “drown the bunnies” comment and other dubious decisions. It should go without saying that it is inappropriate for a college president to tell faculty that sometimes “you just have to drown the bunnies…put a Glock to their heads.” This quote, by president Simon Newman, was in response to faculty concerns about a plan to cull students early in the semester (before they counted in retention and graduation rates) using the results of an incoming student survey. Needless to say, when the campus newspaper ran the story, the campus erupted in chaos. The president responded by trying to fire the paper’s advisor, which garnered even more negative attention. After the university’s accreditor raised concerns, Newman resigned within days.