An academic summer unlike any other is rapidly drawing to a close as students and colleges prepare for the start of fall classes in just a few weeks. Not surprisingly, the number of colleges abandoning their plans for a mainly in-person term is continuing to increase as coronavirus cases also increase in much of the country. These colleges are still allowing the most vulnerable students to live on campus and offer hands-on courses in person, but shifting everything else online.

While a growing number of college students were already taking at least some online classes prior to March 2020, few colleges want to voluntarily move entirely online. The financial hit of having no students on campus can be massive; as an example, the University System of Georgia is projecting a loss of nearly half a billion dollars if campuses cannot reopen to students this fall. Colleges also have to worry about political pushback from donors, alumni, conservative state legislators, and the Trump administration as they make their decision.

In the past week, at least a dozen four-year colleges shifted away from their plans earlier this summer for in-person classes to the new reality of a mainly online fall. As I have been processing everything that has been going on (I probably refresh this Google search more than I should), I have been fascinated by how colleges are messaging their closures and in some cases trying to shift the blame to others. Let’s dive into some strategies that colleges are taking.

Most of these announcements mentioned an increase in the prevalence of the virus, which is the reason that I expected colleges to use when they were forced to change plans. Below are two good examples of this type of announcement—Morehouse College (top) and Rhode Island College (bottom). This strategy works well for early announcements, and I have no objections to colleges saying that public health conditions will not allow an opening with enough time for a proper online pivot. But given how hard it is to bend the infection curve, blaming the virus looks silly if a college waits until two weeks before the fall semester to make its plans.

In a pair of Friday afternoon announcements, Claremont McKenna College and Fresno Pacific University took clear shots at the governor of California for not approving colleges to resume in-person operations by this point in time. Claremont even felt it suitable to italicize the word “absence” in their announcement.

Fresno Pacific’s announcement is less pugnacious, but still emphasizes that they spent millions of dollars in a failed effort to reopen—and are spending less than that on improving online classes. 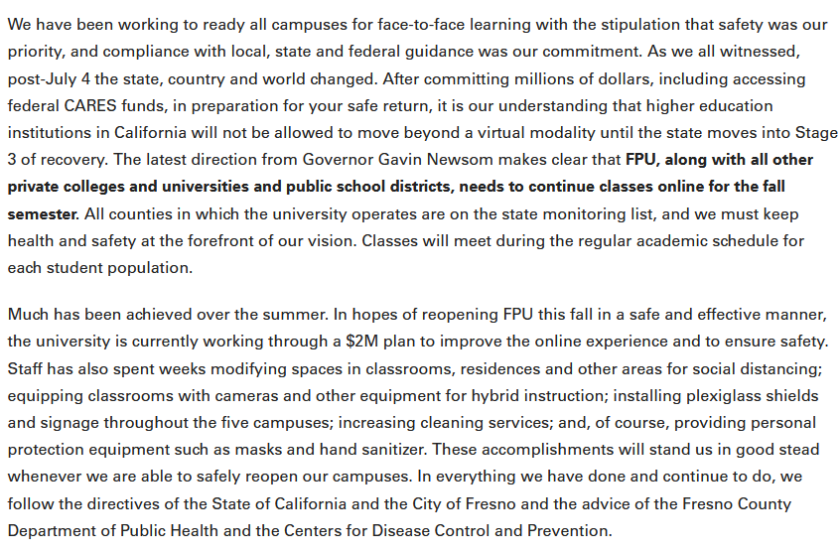 College leaders may be publicly blaming governors or public health officials for not allowing students to return to campus, but they are likely secretly happy to blame someone else for making a difficult decision. However, governors also don’t want to be blamed for blocking the reopening of campuses. If governors delay approval long enough without officially closing campuses, colleges will have to make the decision on their own. The governor could then grant approval to reopen right before the start of the fall term, but that would be too late for many colleges to shift plans. Nobody wants to take the blame for the inevitable decision.

And just for fun, here is a snippet of Harrisburg University’s announcement. Community colleges and HBCUs have been leading the way all along in making timely decisions, but other colleges clearly want to wait to follow the pack. There is a lot of comfort in that approach, but it threatens colleges’ ability to offer high-quality online classes by waiting too long to make the decision.

I still expect a whole bunch of colleges to switch to a mainly online fall in the next week to ten days. Red-state public universities and moderately selective private colleges will be the last to announce their actual fall plans due to concerns about retribution from public officials and the possibility of losing students to other colleges that wait a few days longer to tip their hands. But the trend of the virus in much of the country and a rapidly approaching fall semester will force many colleges to issue statements like the ones that I shared above.

6 thoughts on “Who Takes the Blame for an Online Fall?”