As debates regarding Higher Education Act reauthorization continue in Washington, one of the key sticking points between Democrats and Republicans is the issue of accountability for the for-profit sector of higher education. Democrats typically want to have tighter for-profit accountability measures, while Republicans either want to loosen regulations or at the very least hold all colleges to the same standards where appropriate.

The case of federal gainful employment (GE) regulations is a great example of partisan differences regarding for-profit accountability. The Department of Education spent much of its time during the Obama administration trying to implement regulations that would have stripped away aid from programs (mainly at for-profit colleges) that could not pass debt-to-earnings ratios. They finally released the first year of data in January 2017—in the final weeks of the Obama administration. The Trump administration then set about undoing the regulations and finally did so earlier this year. (For those who like reading the Federal Register, here is a link to all of the relevant documents.)

There has been quite a bit of talk in the higher ed policy world that GE led colleges to close poor-performing programs, and Harvard closing its poor-performing graduate certificate program in theater right after the data dropped received a lot of attention. But to this point, there has been no rigorous empirical research examining whether the GE regulations changed colleges’ behaviors.

Until now. Together with my sharp PhD student Zhuoyao Liu, I set out to examine whether the owners of for-profit colleges closed lousy programs or colleges after receiving information about their performance.

You can download our working paper, which we are presenting at the Association for the Study of Higher Education conference this week, here.

For-profit colleges can respond more quickly to new information than nonprofit colleges due to a more streamlined governance process and a lack of annoying tenured faculty, and they are also more motivated to make changes if they expect to lose money going forward. It is worth noting that no college should have expected to lose federal funding due to poor GE performance since the Trump administration was on its way in when the dataset was released.

Data collection for this project took a while. For 4,998 undergraduate programs at 1,462 for-profit colleges, we collected information on whether the college was still open using the U.S. Department of Education’s closed school database. Looking at whether programs were still open took a lot more work. We went to college websites, Facebook pages for mom-and-pop operations, and used the Wayback Machine to find information on whether a program appeared to still be open as of February 2019.

After doing that, we used a regression discontinuity research design to look at whether passing GE outright (relative to not passing) or being in the oversight zone (versus failing) affected the likelihood of college or program closures. While the results for the zone versus fail analyses were not consistently significant across all of our bandwidth and control variable specifications, there were some interesting findings for the passing versus not passing comparisons. Notably, programs that passed GE were much less likely to close than those that did not pass. This suggests that for-profit colleges, possibly encouraged by accrediting agencies and/or state authorizing agencies, closed lower-performing programs and focused their resources on their best-performing programs. 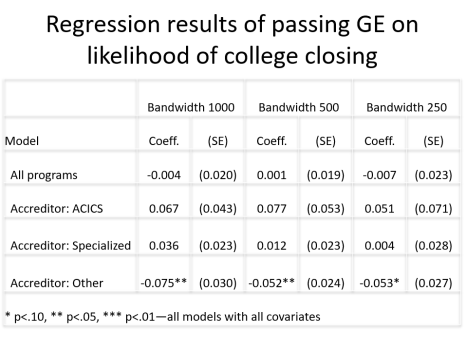 We are putting this paper out as a working paper as a first form of peer review before undergoing the formal peer review process at a scholarly journal. We welcome all of your comments and hope that you find this paper useful—especially as the Department of Education gets ready to release program-level earnings data in the near future.