Yesterday, I wrote about how it was likely the case that some of the decline in SAT scores  was due to states and districts requiring students to take the SAT. At the request of several esteemed readers, I did a back-of-the-envelope calculation to see how much of the change in SAT scores over the last five years is due to states requiring all students to take the SAT (hat tip to Kan-Ye Test (love the name!) for pointing me to the data). Between 2011 and 2015, Delaware, the District of Columbia, and Idaho moved from having some of their students take the SAT (14,765) to having all of their students (32,236) take the SAT. Meanwhile, the average SAT score fell from 1500 to 1490.

I’d still love to see the College Board pull out data from the districts which moved to require the SAT, as it’s entirely possible that half of the decline in SAT scores could just be due to students who were required to take the test. They’ve got the data, and I hope they take a look!

The average score for students taking the venerable SAT exam in 2014-2015 was 1490, seven points below last year’s scores and the lowest score since the writing section was added in 2005. Not surprisingly, this drop is generating a lot of media coverage—much of it focused on how high schools are failing America’s children. But while high schools may very well be a concern (and those of us in colleges shouldn’t get off without criticism, either), I contend that the decline in SAT scores may be just fine.

The simple reason for my lack of concern is that the decline may very well be due to more students taking the exams in response to new state laws and district rules in several states requiring or encouraging testing. For example, Idaho required beginning in 2012 that students had to take the ACT or SAT to graduate—and that the state would cover SAT costs for students. In 2011-2012, 27% of Idaho students took the SAT and got an average score of 1613, while practically all Idaho students in 2014-2015 took the SAT and got an average score of 1372. (The District of Columbia, Delaware, and Maine—the other three jurisdictions where basically everyone takes the SAT—had similarly low scores.) Either Idaho high schools imploded over a three-year window, or the types of students who weren’t previously taking the test didn’t have the same level of ability on standardized tests as the 27% of students who were likely considering selective four-year colleges. 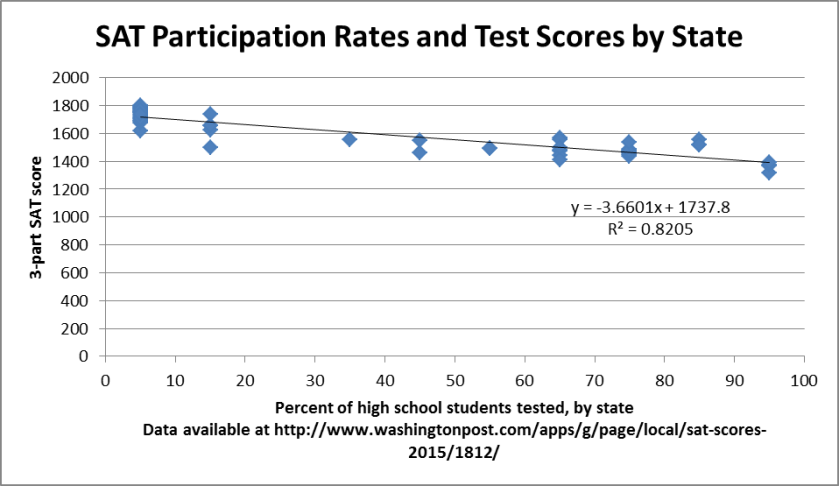 What I would like to see is some comparisons across similar types of students over time. Among students who signal a clear intent to go to a four-year college, are SAT scores declining? Or is the entire decline driven by different students taking the test? And are students considering college for the first time because they took the SAT and did reasonably well? There is value to everyone taking a standardized test across states (given the differences in state high school exams), but it’s inappropriate to look at trends over time with such large differences in the types of students taking the test.