A new addition to this year’s Washington Monthly college guide is a ranking of “Affordable Elite” colleges. Given that many students and families (rightly or wrongly) focus on trying to get into the most selective colleges, we decided to create a special set of rankings covering only the 224 most highly-competitive colleges in the country (as defined by Barron’s). Colleges are assigned scores based on student loan default rates, graduation rates, graduation rate performance, the percentage of students receiving Pell Grants, and the net price of attendance. UCLA, Harvard, and Williams made the top three, with four University of California campuses in the top ten.

I received an interesting piece of criticism regarding the list by Sara Goldrick-Rab, professor at the University of Wisconsin-Madison (and my dissertation chair in graduate school). Her critique noted that the size of the school and the type of admissions standards are missing from the rankings. She wrote:

“Many schools are so tiny that they educate a teensy-weensy fraction of American undergraduates. So they accept 10 poor kids a year, and that’s 10% of their enrollment. Or maybe even 20%? So what? Why is that something we need to laud at the policy level?”

While I don’t think that the size of the college should be a part of the rankings, it’s certainly worth highlighting the selective colleges that have expanded over time compared to those which have remained at the same size in spite of an ever-growing applicant pool.

[UPDATE: The fall enrollment numbers include all undergraduates, including nondegree-seeking institutions. This doesn’t have a big impact on most colleges, but does at Harvard–where about 30% of total undergraduate enrollment is not seeking a degree. This means that enrollment growth may be overstated. Thanks to Ben Wildavsky for leading me to investigate this point.]

The median Affordable Elite college enrolled 3,354 students in 2012, compared to 1,794 students at the median less-selective college. The percentage change at the median college between each year and 2012 is below:

The distribution of growth rates is shown below: 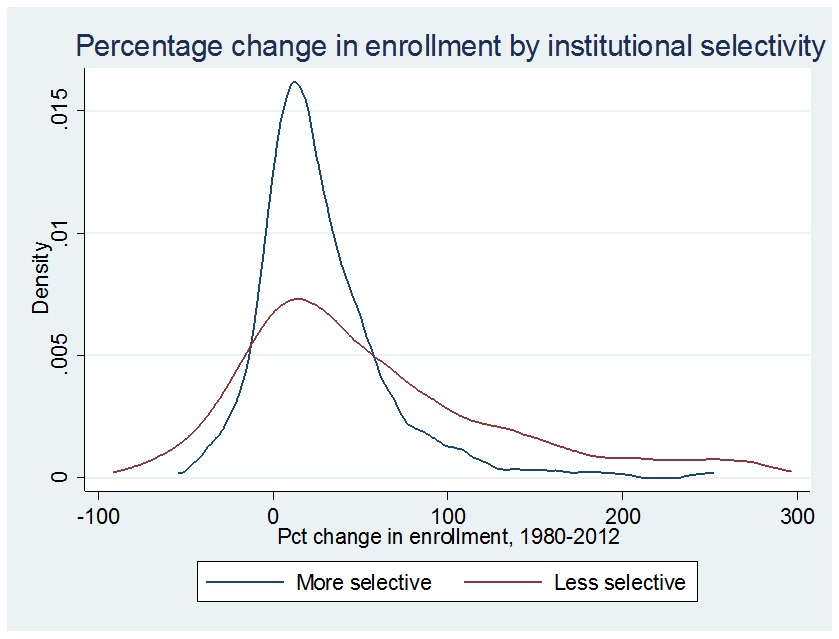 But some elite colleges have grown. The top ten colleges in the Affordable Elite list have the following growth rates:

One thought on “Are “Affordable Elite” Colleges Growing in Size, or Just Selectivity?”