The outgoing Obama administration placed for-profit colleges under a great deal of scrutiny. This includes gainful employment regulations that will require graduates of vocationally-oriented programs to meet debt-to-earnings requirements and borrower defense to repayment rules (which will likely be quickly abandoned by the Trump administration) designed to help students who feel they were defrauded by their college.

But special federal scrutiny of the for-profit sector has been around for decades, with one rule shaping the behavior of many colleges. This post explores the extent to which for-profit colleges rely on federal funds. It turns out that many rely heavily on these funds, although it’s not always clear what the implications are for the public.

In the 1992 Higher Education Act reauthorization, Congress included a provision that only applied to for-profit colleges, limiting the percentage of total revenue that for-profits could receive from federal grant, loan, and work-study programs to 85%. (This notably excludes veterans’ benefits, which are a large source of revenue for some colleges.) This percentage was increased to 90% in the 1998 reauthorization, which led to the rule being commonly referred to as “90/10.”

For-profit colleges that exceed 90% of their revenue from federal financial aid in two consecutive years can lose access to federal aid for the following two years. Some Democrats have tried to move back to the 85/15 rule or include veterans’ benefits in the federal financial aid portion of revenue, but these efforts will likely be unsuccessful given the support Republicans have received from for-profit colleges. Notably, some for-profits get a sizable portion of their revenue from veterans’ benefits.

I examined data from the Department of Education between the 2007-08 and 2014-15 academic years to look at how many for-profit colleges are close to the 90% threshold. As the table below shows, a sizable percentage of for-profit colleges get between 80% and 90% of their revenue from federal financial aid. In 2007-08 (the last year before the Great Recession), 23% of colleges were in this category. This rose to 35% in 2009-10 and 38% in 2011-12—the beginning of a sizable enrollment decline in the for-profit sector. As the for-profit sector contracted, the percentage of colleges receiving 80% and 90% of their revenue from federal aid fell to 29% in 2014-15. Yet very few colleges have crossed over the 90% threshold, and just two small colleges lost federal aid eligibility this year for going over 90% in two consecutive years.

I then looked at the reliance on federal aid among the eleven for-profit colleges with at least $600 million in overall revenue in the 2013-14 academic year (as 2014-15 revenue data were incomplete as of this analysis). Most of these colleges became slightly less reliant on federal funds between 2010-11 and 2014-15, highlighted by DeVry’s drop from 81% to 66%. DeVry has notably pledged to voluntarily abide by the 85/15 rule across all of its colleges (including veterans’ benefits), so its declining reliance on federal aid is not surprising. ITT Tech saw a 20% increase in its share of revenues coming from financial aid before its closure, while Ashford, Kaplan, and Phoenix consistently remained at or above 80% across the five years. The American Public University System, which focuses on veterans, got less than half of its revenue from federal financial aid.

In December, the Department of Education worked with the Department of Defense and Department of Veterans Affairs to produce a dataset that included colleges’ revenue from various military and veterans’ benefits programs. A key finding of the departments is that an estimated 200 for-profit colleges would get more than 90% of their revenue from federal sources if all federal funds were counted, up from 17 under the current version of the 90/10 rule. In other words, roughly 200 for-profit colleges are almost entirely funded by the federal government, although some of this funding is returned to the government when students repay their loans. Yet this fact is obscured when military and veterans’ benefits are excluded from the calculations.

Below is a summary of the approximate revenue percentages from Department of Education and military sources for the eleven largest for-profits in the 2013-14 academic year. 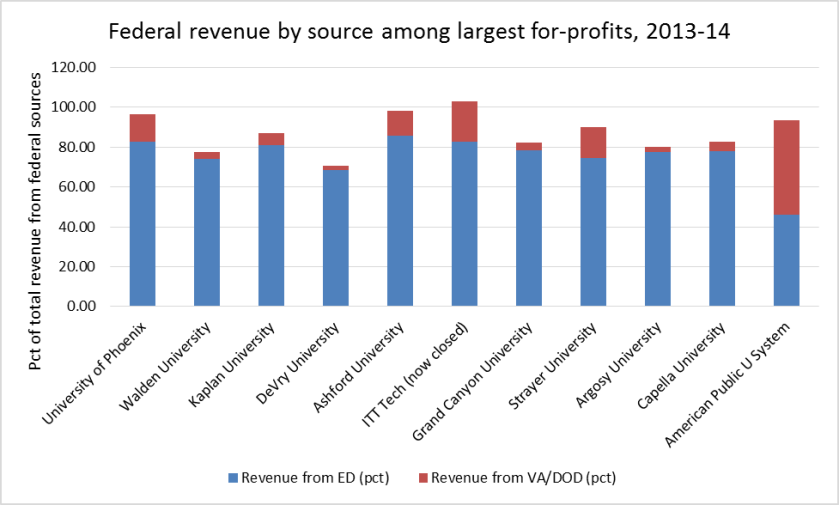 Five of these top eleven colleges exceed the 90/10 rule once all federal sources are included. All for-profit colleges are estimated to have at least 70% of revenue come from federal sources.  However, this calculation may be several percent off due to differences in how each source calculates an academic year (as evidenced by ITT Tech’s 103% of revenue coming from the federal government).

The data suggest that American Public University gets more revenue from military sources than the Department of Education, while four other for-profits (Ashford, ITT Tech, Phoenix, and Strayer) got at least ten percent. From this table, it is clear that some for-profits consider military benefits as an important revenue source (others, such as DeVry and Argosy, do not).

On the other hand, the heavy reliance on federal funds also reflects the reality that for-profit colleges serve a large percentage of financially needy students. Many of these students are unable to attend college without some sort of financial assistance, whether it be the Pell Grant, student loans, or state appropriations that help to lower the price tag for college. A sizable percentage of public and private nonprofit colleges get a majority of their revenue from the federal or state governments, but they do not face the same level of public scrutiny as for-profit colleges.

Finally, it would be helpful if the Department of Education provided data on how much revenue all colleges received from military sources in addition to federal financial aid dollars. This could be used to highlight colleges that rely heavily on government funding, but it could also be used to showcase colleges that serve a particularly large percentage of active-duty military members and veterans.