President Trump is fond of negotiating, as can be evidenced through his long business career and many promises to renegotiate a whole host of international agreements. Federal higher education policy is also fond of negotiation, thanks to a process called negotiated rulemaking that brings a range of stakeholders together for an arduous series of negotiations regarding key changes to federal policies. Notably, if stakeholders do not come to an agreement, the Department of Education can write its own rules—something that the Obama administration did on multiple occasions. (For more on the nitty-gritty of negotiated rulemaking, I highly recommend Rebecca Natow’s new book on the topic.)

In a long-expected announcement, the Department of Education announced Wednesday morning that it would be renegotiating two key higher education regulations (gainful employment and borrower defense to repayment) that were initially negotiated during the Obama administration, with the first meetings beginning next month. To get an idea of how expected these announcements were, here are the stock prices for Adtalem (DeVry) and Capella right after the announcement (which began to break around 11:30 AM ET). Note the fairly small movement in share prices, suggesting that changes were baked into stock prices pretty well. 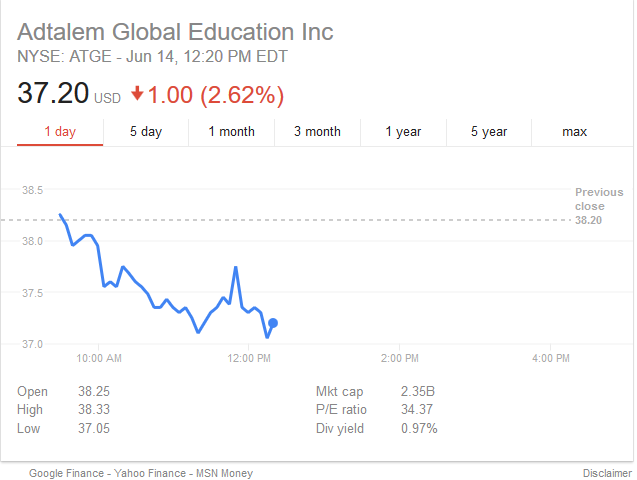 It is extremely likely that the negotiated rulemaking committees won’t be able to come to an agreement (again), so the new rules will reflect the Trump administration’s higher education priorities. Here is my take on what the two rules might look like.

The Obama administration first announced its intention to tie federal financial aid eligibility for select vocational programs (disproportionately at for-profit colleges) in 2009 and entered negotiated rulemaking in 2009-10. The first rules, released in 2011, were struck down in 2012 due a lack of a “reasoned basis” for the criteria used. The second attempt entered negotiated rulemaking in 2013, survived legal challenges in 2015, and began to take effect with the first data release in early 2017. Nearly all of the programs that failed in the first year were at for-profit colleges, but this also led to Harvard shutting down a failing graduate theater program. No colleges have lost aid eligibility yet, as two failing years are required before a college is at risk of losing funds.

The Trump administration is likely to take one of three paths in changing gainful employment regulations:

Path 1: Expand the rules to cover everyone. One of the common critiques against the current regulations is that they only cover nondegree programs at nonprofit colleges in addition to nearly all programs at for-profit colleges. For example, doctoral programs in education at Capella University are covered by gainful employment, while my program at Seton Hall University is not. Requiring all programs to be covered by gainful employment would both preserve the goals of the original regulations while silencing some of the concerns. But this would face intense pressure from colleges that are not currently covered (particularly private nonprofits).

Path 2: Restrict the rules to cover only the most at-risk programs. It is possible that gainful employment metrics could be used along other risk factors (such as heightened cash monitoring status or high student loan default rates) to determine federal loan eligibility. If written a certain way, this would free nearly all programs from the rules without completely unwinding the regulations.

Path 3: Make the rates for informational purposes instead of accountability purposes. This is the most likely outcome in my view. The Trump administration can provide useful consumer information without tying federal funds (a difficult thing to actually do, anyway). In this case, I could see all programs being included since the data will be somewhat lower-stakes.

Unlike gainful employment, borrower defense to repayment regulations were set to affect for-profit and nonprofit colleges relatively equally. Here is what I wrote back in October about the regulations when they were announced.

These wide-ranging regulations, which will take effect on July 1, 2017 (a summary is available here) allow individuals with student loans to get relief if there is a breach of contract or court decision affecting that college or if there is “a substantial misrepresentation by the school about the nature of the educational program, the nature of financial changes, or the employability of graduates.” The language regarding “substantial misrepresentation” could have the largest impact for both for-profit and nonprofit colleges, as students will have six years to bring lawsuits if loans are made after July 1, 2017.

These regulations have been halted and will not take effect until a new round of negotiated rulemaking takes place. They were generally unpopular among colleges, as evidenced by a strong lobbying effort from historically black colleges that were worried about the vague definition of “misrepresentation.” The outcome of this negotiated rulemaking session is likely to be a significant rollback of the scope to cover only the most egregious examples of fraud.

Although these two sets of negotiated rulemaking sessions are likely to mainly be for show due to the Department of Education’s final ability to write rules when the committee deadlocks, they will provide insight into how various portions of the higher education community view the federal role in accountability under the Trump administration. The Department of Education doesn’t livestream these meetings (a real shame), but I’ll be following along on Twitter with great interest. Pass the popcorn, please?