Like seemingly most American households, the Kelchens get far more junk in the mail than actual mail of value. We get about as many credit card applications as our shredder can handle, as well as folks trying to sell us a broad array of products and services. But letters that mention student loan debt and say “Final Notice” on them always get my attention, both as a researcher of higher education finance and as a proud part-owner of my wife’s law school debt.

The letter below came last week from a company called Direct Document Solutions out of Irvine, California. It says that we may be eligible to consolidate our existing federal student loan into a lower-interest federal loan—and that we may be eligible for loan forgiveness. While the fine print says that the company is fee-based and that they are not a part of the Department of Education, it’s in much smaller font than the rest of the letter. 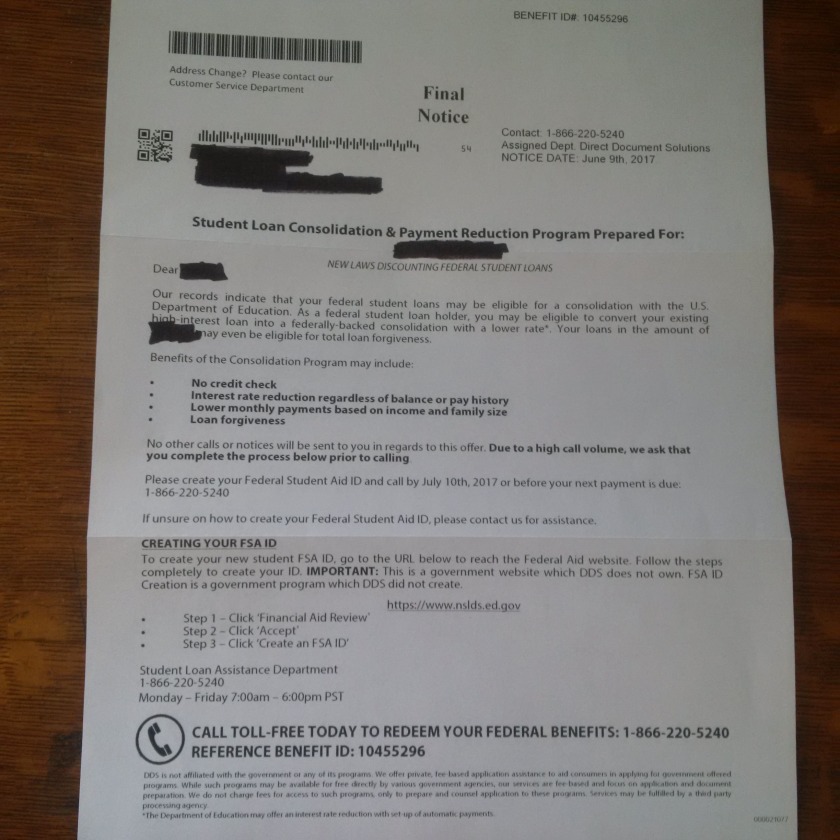 After looking at this letter for a while, I realized that it looked vaguely like another student loan consolidation letter we had received several months prior. I dug through my Twitter media archives and found a nearly-identical letter (presented below) from last August from a company called Certified Document Center (which operates as Document Preparation Services at the same address as Direct Document Solutions). The Better Business Bureau gave the company a C rating, with 18 complaints in the last 12 months alone.

Just before I got the letter last week, NerdWallet put out a helpful list of about 130 companies that are less-than-ideal actors in the student debt consolidation business. To get on this list, companies needed to have faced significant complaints or have a D or F rating from the Better Business Bureau. So this means that Document Preparation Services sneaks over the bar and doesn’t make the list.

But in my research of this company, I discovered it was a part of the Association for Student Loan Relief—a group of 118 companies that specialize in student loan consolidation. A number of these companies show up on NerdWallet’s watch list. These companies tend to be clustered in certain areas—for example, nine are located in Irvine, California and quite a few are located in South Florida. This, along with the multiple aliases that several companies appear to have used, suggest the possibility that a number of these companies may be run by the same people or group of people.

People who are struggling to repay their federal loans (or are simply seeking a better deal) should probably start by talking with their current servicer or even reaching out to their former college’s financial aid office. If an income-driven repayment plan is the best choice, there is usually little need to involve a paid consolidation company. For students who are seeking a lower interest rate, there are legitimate companies (like Earnest and SoFi) and banks that will refinance student loans. Refinancing can be a great option for people who are certain that they won’t benefit from income-driven repayment plans and have fairly high incomes, but this is a decision that should be researched before making. Read reviews, look at BBB ratings (and the number of complaints), and be very skeptical when changing anything with your student loans.

No matter what you do, don’t put your student loans in the hands of some random company sending you “Final Notice” letters even though you have no relationship with them. That’s a great way to ruin your credit and empty your bank account.