The official graduation rate that colleges must report to the U.S. Department of Education has included only first-time, full-time students who graduate from that college within 150% of normal time (three years for a two-year college or six years for a four-year college). Although part-time and non-first-time students were included in the federal government’s Integrated Postsecondary Education Data System (IPEDS) collection for the first time this year, it will still be about another year or so before those data will be available to the public. (Russell Poulin at WICHE has a nice summary of what the new IPEDS outcome measure data will mean.)

In the meantime, the Student Achievement Measure (SAM)—a coalition of organizations primarily representing public colleges and funded by the Gates Foundation and Carnegie Corporation—has developed in response to calls for more complete tracking of student outcomes. SAM has launched a public relations campaign that has been quite visible in the higher education community using the hashtag #CountAllStudents to show the number of students who aren’t captured in the current graduation rate metric. (Barack Obama and Sarah Palin are two well-known examples.)

But what can be learned from a more complete picture of graduation rates? In this blog post, I examined SAM outcome data for 54 participating colleges in four states (California, Maryland, Missouri, and South Carolina) to see the extent to which graduation rates for first-time, full-time students at four-year universities changed by counting students who transferred and graduated elsewhere as a success, as well as looking at the percentage of students still enrolled after six years. I focused on first-time, full-time students here so I could compare the current graduation rate metrics to alternative metrics; completion rates for part-time students can be a topic for another day. The data can be downloaded here, and a summary is below.

The first figure below shows the distribution of IPEDS and SAM graduation rates, and it shows that they are pretty strongly related. The correlation between the two graduation rates is 0.966, which is a nearly-perfect relationship. 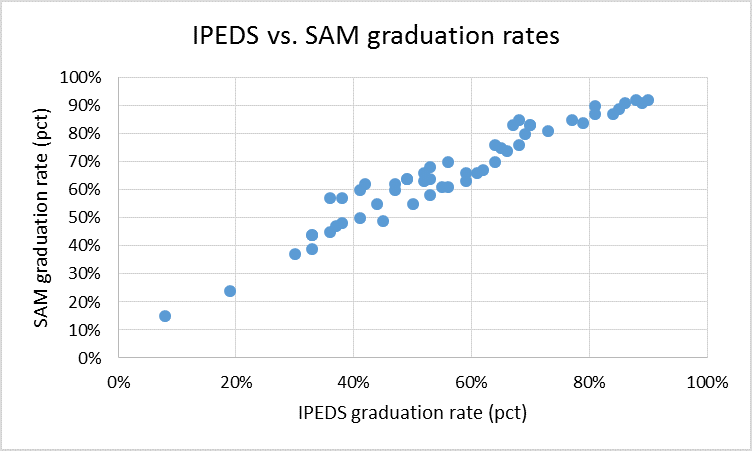 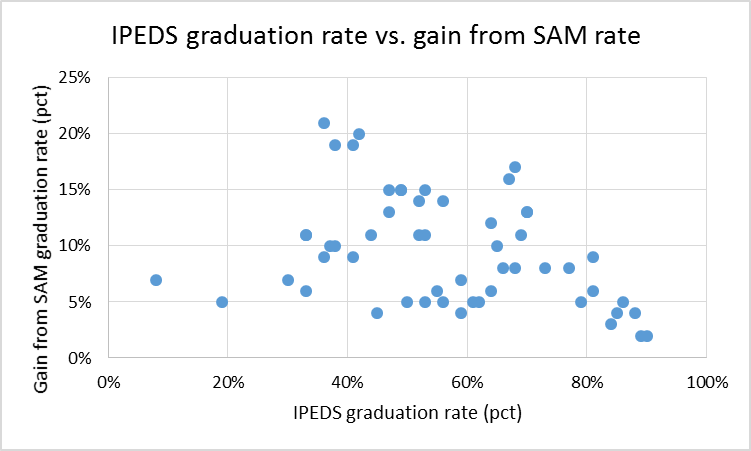 It is also stunning to see the percentage of students who were still enrolled in college after six years. While the average college in my sample had 15% of its first-time, full-time students still plugging away somewhere, most of the less-selective colleges with higher percentages of lower-income and minority students still had at least 20% of students still enrolled. The new IPEDS metrics will count students through eight years, which should give a better picture of completion rates. I’m excited to see those metrics come out in the future—and hopefully incorporate them in future versions of the Washington Monthly college rankings.

One thought on “Which Colleges Benefit from Counting More Graduates?”