Student loan debt in the United States is now over $1.25 trillion, nearly three times as much as just a decade ago. The typical student graduating with a bachelor’s degree with debt (about 70 percent of all students) now owes between $30,000 and $40,000 for their education, about twice as much as a decade ago. Although taking on modest amounts of debt in order to pay for college is generally a good bet in the long run, colleges with similar admissions standards and resource levels leave students with different amounts of debt.

College Scorecard data highlight the large amount of variation in what high-debt undergraduate students borrow across colleges with similar admissions criteria.1 The figure below shows the distribution of the 90th percentiles of debt burdens (in 2016 dollars) for students who left 1,156 four-year public and private nonprofit colleges in 2006 or 2007, broken down into three selectivity categories.2 Not surprisingly, the most selective colleges, which have the resources to offer more scholarships and fewer students with financial need, have lower debt burdens than somewhat selective or less selective colleges. These differences in borrowing by selectivity are larger than by type of college, as median debt at public colleges was only about $2,400 more than at private nonprofit colleges.

Attending college and taking on $40,000 or even $50,000 in debt can be an outstanding investment in a student’s future—but only if students from that college actually end up getting good jobs. I then examined the relationship between 90th percentile debt burdens upon leaving college in 2006 and 2007 and the median earnings of students in 2011 and 2012 who began college in 2001 and 2002.3 The figure below shows that colleges that tend to have higher amounts of student debt also tend to have lower earnings in later years, which is in part due to student characteristics and their prior family income rather than the causal impact of the college. The correlation coefficient between debt and earnings is about -0.35 overall, but between -0.10 and -0.20 within each selectivity group. This suggests that colleges with higher debt burdens also have higher earnings, but much of the relationship between debt and earnings can be explained by selectivity. 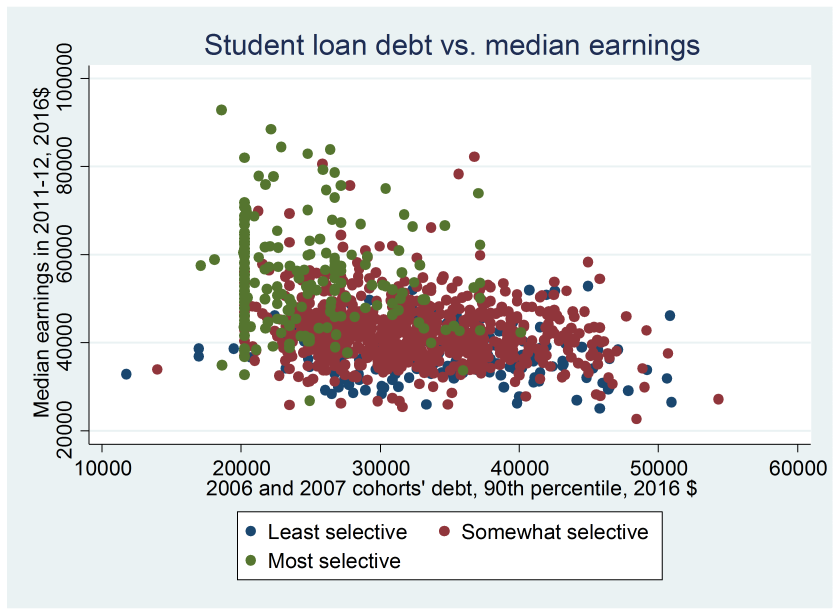 An old rule of thumb in paying for college is that students should not borrow more for a bachelor’s degree than they expect to earn one year after graduation. Although the presence of income-driven repayment programs allows students to repay their federal student loans even if they make less money, the debt-to-income ratio is still a useful way to judge colleges. The final figure shows the distribution of colleges’ debt-to-income ratios using the initial debt upon leaving college for high-debt students and annual earnings approximately five years later. A ratio over 1 at this point is a major concern, as earnings should grow considerably during a student’s first few years after college.

With student debt being a growing concern among Americans and playing a key role in the presidential campaign, students and their families are wise to consider the likely return on their investment in higher education. As the data show, some colleges do leave their former students with less debt than other similar colleges. But among less-selective colleges that enroll large numbers of lower-income or minority students, some amount of debt is almost unavoidable. Students should not seek to avoid all debt, but they should be mindful that even among broad-access institutions, colleges vary in how much debt their students take on.

1 Debt and earnings data from the College Scorecard combine students who graduate with those who dropped out.

3 The College Scorecard does not track debt burdens by when students started college (only when they left), so I estimated that students either graduated or left college in about five years.