One of the many issues currently derailing bipartisan agreement on federal Higher Education Act reauthorization is how to treat for-profit colleges. Democrats and their ideologically-aligned interest groups, such as Elizabeth Warren and the American Federation of Teachers, have called on Congress to cut off all federal funds to for-profit colleges—a position that few publicly took before this year. Meanwhile, Republicans have generally pushed for all colleges to be held to the same accountability standards, as evidenced by the Department of Education’s recent decision to rescind the Obama-era gainful employment era regulations that primarily focused on for-profit colleges. (Thankfully, program-level debt to earnings data—which was used to calculate gainful employment metrics—will be available for all programs later this year.)

I am spending quite a bit of time thinking about gainful employment right now as I work on a paper with one of my graduate students that examines whether programs at for-profit colleges that failed the gainful employment metrics shut down at higher rates than similar colleges that passed. Look for a draft of this paper to be out later this year, and I welcome feedback from the field as soon as we have something that is ready to share.

But while I was putting together the dataset for that paper, I realized that new data on the 90/10 rule came out with basically no attention last December. (And this is how blog posts are born, folks!) This rule requires for-profit colleges to get at least 10% of their revenue from sources other than federal Title IV financial aid (veterans’ benefits count toward the non-Title IV funds). Democrats who are not calling for the end of federal student aid to for-profits are trying to get 90/10 changed to 85/15 and putting veterans’ benefits in with the rest of federal aid, while Republicans are trying to eliminate the rule entirely. (For what it’s worth, here are my thoughts about a potential compromise.)

With the release of the newest data (covering fiscal years ending in the 2016-17 award year), there are now ten years of 90/10 rule data available on Federal Student Aid’s website. I have written in the past about how much for-profit colleges rely on federal funds, and this post extends the dataset from the 2007-08 through the 2016-17 award years. I limited the sample to colleges located in the 50 states and Washington, DC as well as to the 965 colleges that reported data over all ten years that data have been publicly released. The general trends in the reliance on Title IV revenues are similar when looking at the full sample, which ranges from 1,712 to 1,999 colleges across the ten years.

The graphic below shows how much the median college in the sample relied on Title IV federal financial aid revenues in each of the ten years of available data. The typical institution’s share of revenue coming from federal financial aid increased sharply from 63.2% in 2007-08 to 73.6% in 2009-10. At least part of this increase is attributable to two factors: the Great Recession making more students eligible for need-based financial aid (and encouraging an increase in college enrollment) and increased generosity of the Pell Grant program. Title IV reliance peaked at 76.0% in 2011-12 and has declined each of the most recent five years, reaching 71.5% in 2016-17.

I then looked at reliance on Title IV aid by a college’s total revenues in the 2016-17 award year, dividing colleges into less than $1 million (n=318), $1 million-$10 million (n=506), $10 million-$100 million (n=122), and more than $100 million (n=19). The next graphic highlights that the groups all exhibited similar patterns of change over the last decade. The smallest colleges tended to rely on Title IV funds the least, while colleges with revenue of between $10 million and $100 million in 2016-17 had the highest shares of funds coming from federal financial aid. However, the differences among the groups were less than five percentage points from 2009-10 forward. 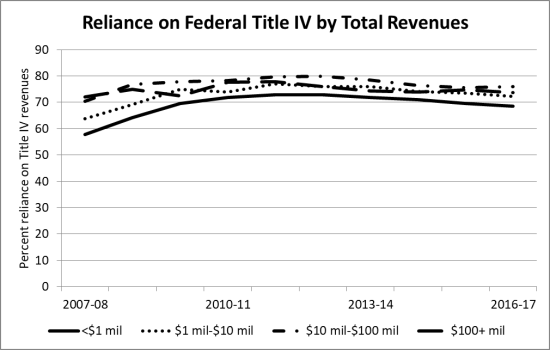 For those interested in diving deeper into the data, I highly recommend downloading the source spreadsheets from Federal Student Aid along with the explanations for colleges that have exceeded the 90% threshold. I have also uploaded an Excel spreadsheet of the 965 colleges with data in each of the ten years examined above.